A pair of socks

"Thank-you Thank-you God bless you"
was the greeting I received from George.  A gentle man, a traveled man,. and a very educated man. He came from the other side of the sea, with 6 years of very specialized training yet not a job in sight. He said materialism is what causes such sadness in America. When expectations are high, disappointments also run high. He filled me with a sense of peace, he seemed to have a wisdom beyond this world. He was poor in the eyes of the world,... yet so very rich!

I am amazed at the charity of the volunteers. Dr's, lawyers, homemakers, builders. We come from such diverse backgrounds yet there is so much giving. One of the most interesting phenomena is how some that do not profess a faith necessarily seem to be the most Christ like! 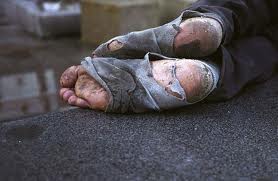 I was taken back when last week  there were a few of us cleaning up and about to leave, when a homeless latino came in drunk asking for something. Almost everything was gone and locked and after a few attempts to understand the man, we decided that he wanted a pair of socks because his bare feet were blistering and bleeding in his worn and mis sized sneaker. One of the men who I never expected started taking his shoe off to give him his socks; at first I thought he was joking but then realized that he was serious! Christ sometimes comes to us in the most unexpected ways through people we see as simply "ordinary" This man has no real desire for religion but from where I stand at least for this moment I am given a new meaning of Church.
We are all there for different reasons, but there seems to be something that gives back so to speak, seems to fulfill an emptiness. It seems that the old bible verse is really true,
"It is in giving that we receive"!
Publicado por Dr Kevin Kulik en 29.9.12