I was asked to make sure everyone was gone from the soup kitchen before I locked up. After checking all the rooms upstairs and down I was able to turn the lights out and head home for a short nap before I would go out for a wonderful diner with about 10 friends.
When I went to my car 3 of our homeless were sitting and talking and eating some of their leftovers in the parking lot.
"Arent you going home?"
were the words that felt natural to say but I caught myself.
There was a time when I would look at people like this and would be afraid of them. I think back and wonder why? I went over to simply say my goodbys but they were so excited to talk with me. I was exhusted from staying out the night before a bit too long and had every intention of giving them a token
" NY minute"
and be on my way back to "normal life"
But something happened, I was taken in by their stories. The hopes longed for, the lives lived on the street and the realization that for them that this conversation might in fact be the best thing that happens to them all week.
I heard the words of the master say, if you do this to the least of my brothers you do this for me.
Suddenly I felt like an honored guest. Instead of just listening, I tried to really be present and before I knew it, what seemed to be charity on my part became a lesson in life for me. I was taken by their simplicity and even generosity. One of the men reached down in his old greasy and worn pants pocket, he had about $1.75 in change and gave all he had to another man who did not have enough for a metro card.
I started to think  how so much of my generosity comes from my abundance rather than my need, I have never given freely all that I had before like this man! I admit I felt my ego engage when I first thought I was being noble  by "giving my time" to what the world called " nobody's".
But I soon felt humbled in this mans presence, He has become my teacher.
Our conversation was interrupted by a call on my brand new i phone  when I realized that I had spent about 2 hours in that parking lot after everyone was suppose to go home. You see what  changed in those 2 hours was my perception of reality. When I came out I saw 3 homeless people in the parking lot that I felt needed to leave and  go home.
When I drove off after our simple conversation I realized that the  parking lot was their home. 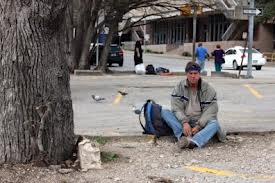